Home Preservation of the Curragh

Preservation of the Curragh 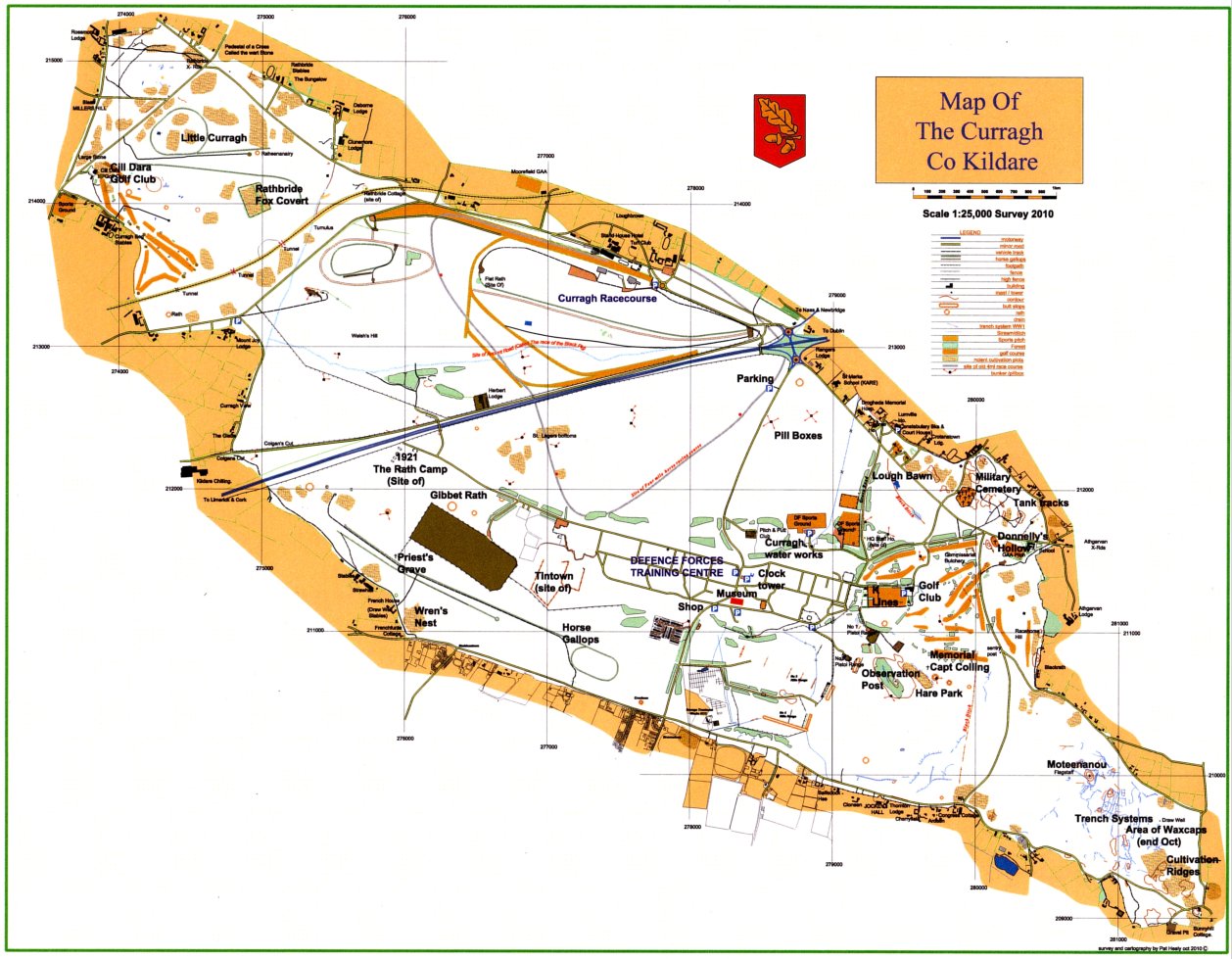 “The Curragh of Kildare ………… is an asset that is completely unique in terms of its archaeological, environmental, historical and cultural heritage and it is a landscape of national and international importance.” – Willie O’Dea, T.D., former Minister for Defence, in his foreword to Dr. John Feehan’s recent book, Cuirrech Lifé, The Curragh of Kildare, Ireland. 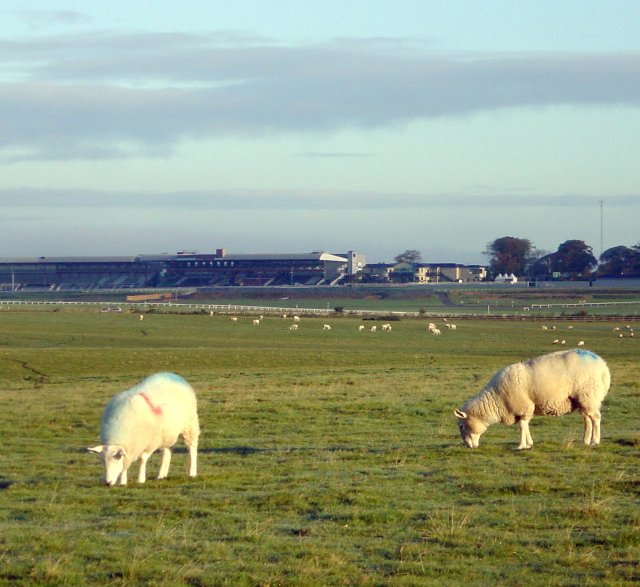 The Curragh as it should be

So what makes the Curragh unique? Well firstly, and principally, it is the largest area of semi-natural grassland in the country and appears to have remained uncultivated for at least 1500 years. It has, over those centuries, evolved its own unique flora, especially in its fungi. Secondly, having been used in ancient times as a place of assembly and ritual, it is rich in archaeological remains, many of them on or not far under the surface and easily damaged. Recent research by Dr. Feehan and others suggests that the plains may have been cultivated in prehistoric times and traces of the cultivation ridges are to be seen in a number of areas of the Curragh.

The Curragh is used as a workplace by three main users: the Defence Forces, the Horse Racing Industry and the Sheep Graziers. It is also used by many clubs and individuals for recreation and sport.

For 1500 years, at least, the Curragh was an open, unenclosed common used for grazing, training of horses and as an assembly and training ground by armies. In the 1840s came the first sub-division of the plains when the Dublin-Cork railway was driven across the Curragh. So now we had the Curragh and “The Little Curragh” on the other side of the tracks. Next was the building of the Curragh Camp in the 1860s and the appropriation of large parts of the plains for rifle ranges. However despite these disturbances the plains recovered and retained their unique character.

The Curragh Aquifer, a vast underground reservoir of clean water, is another unique and valuable feature. Stretching from beyond Kildare to near Naas this proved to be the largest and deepest aquifer of its kind in the country. The aquifer, as well as supplying the needs of the Curragh Camp also feeds Pollardstown Fen, the Grand Canal and the National Stud. 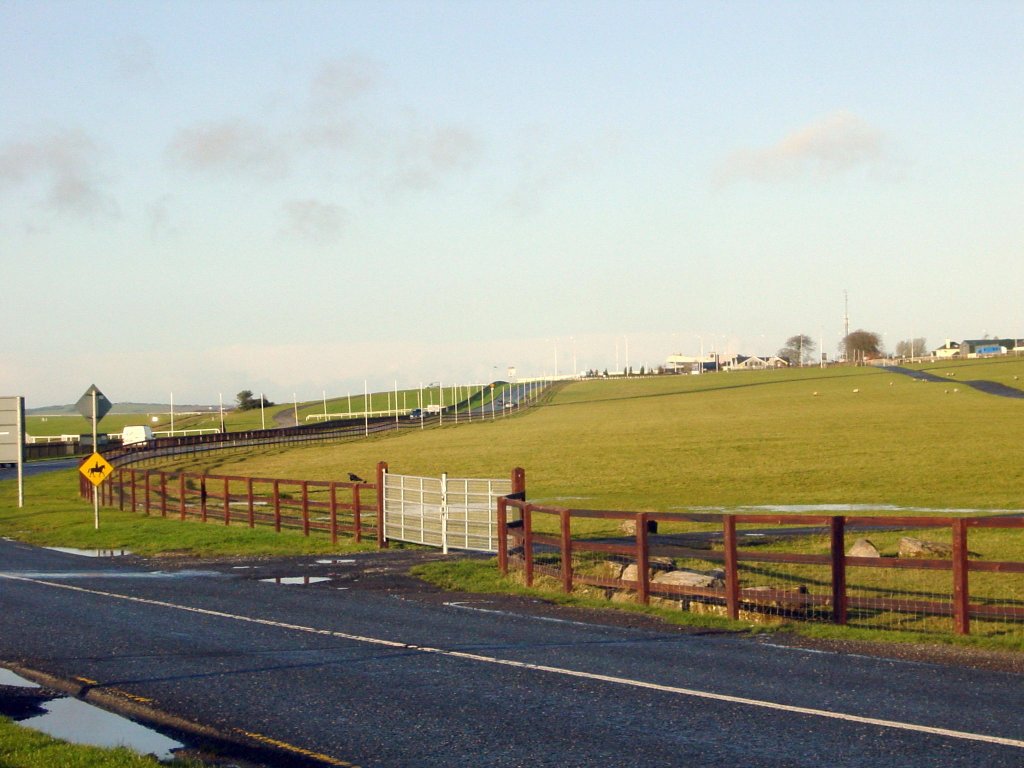 In the mid-1960s came the enclosure of the Curragh Racecourse, all 800 acres of it. Inevitably the exclusion of sheep from the enclosure meant a change in the nature of the sward and that part of the Curragh lost its unique character. When the M7 motorway was built in a deep cutting across the plains it had to be fenced in to prevent encroachment on the roadway. This meant that the plains were yet again subdivided. Recently we have had the enclosure and fencing of a large tract of the plains near the racecourse. The recent erection of an electric fence around the Curragh Golf Course has seen sheep excluded from that area. Other encroachments and enclosures, with and without official approval, have further subdivided the plains. 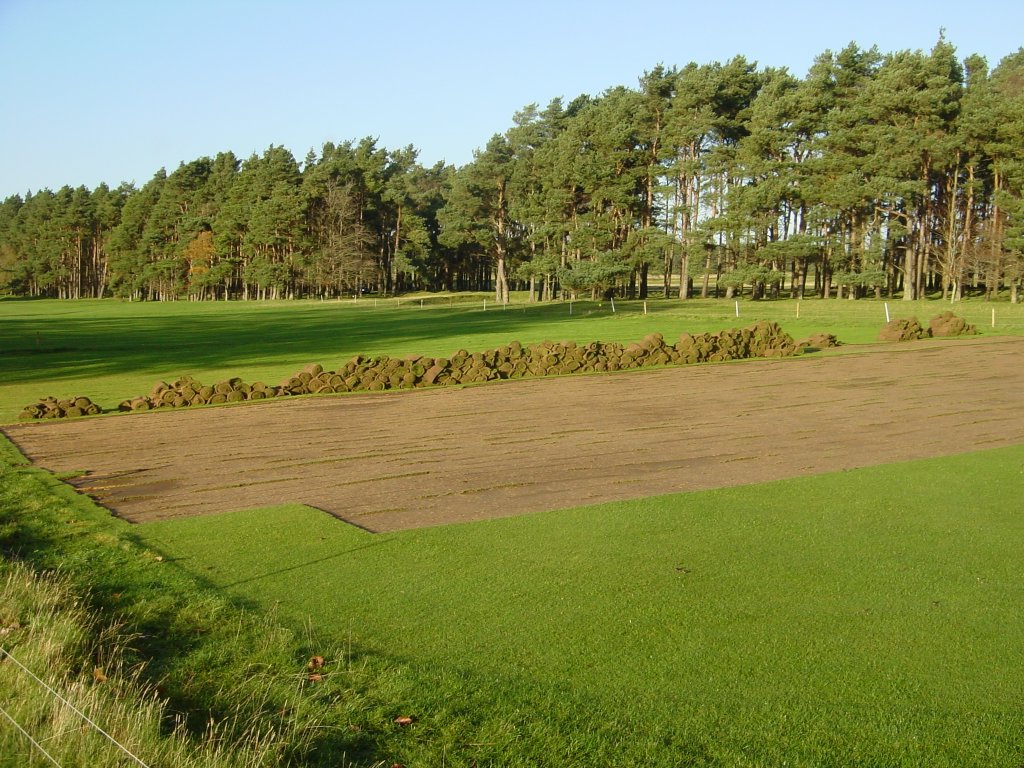 Electric fencing and sod stripping at the Curragh Golf Club

Other users, and abusers, of the plains are causing damage through driving on them, exercising horses in unauthorised areas, territorial grazing, scrambling, dumping, cutting sods, ploughing up furze etc.

Today and for many years the Curragh is the responsibility of the Dept. of Defence, specifically the Property Management Branch.

In 1997 an Environmental Policy Board, which had been set up by the Dept. of Defence and the Defence Forces jointly, reported significant ongoing environmental damage to the Curragh Plains. As a result of this report an Inter-Departmental Task Force on the Future Management and Development of the Curragh of Kildare was set up. Its terms of reference were: to examine the ongoing threat to the integrity of the Curragh Plains which had arisen as a result of a marked increase in the level of activities among users and the level of developments taking place on the periphery of the Curragh. The Task Force was asked to report and make recommendations on the future management and development of the area.

Over ten years ago, in May 1999, the Task Force presented its report to Government. Significantly, the final paragraph of the Executive Summary of the report states: “It is the view of the Task Force that the greatest single threat to the area is that no action will be taken to rectify the situation. If the unique environment of the Curragh is to be preserved action must be taken as a matter of urgency.” The recommendations of the Task Force were accepted by Government. While some relatively minor matters, such as new speed limits, sheep grids and sewage have been addressed by the Dept. of Defence, there has been no action on the main recommendations dealing with the need for legislation to set up a strong new management structure backed up by proper penalties and sanctions for persons or organisations causing damage to the Curragh Plains. This recommendation of the Task Force has now been rejected by the Minister for Defence. In a reply to a Parliamentary Question on 10th Nov. 2009 the former Minister said “I have decided not to proceed with the establishment of the (Curragh) Authority, which was a primary focus of the Bill.”

An abridged copy of the Task Force Report can be viewed on the Dept. of Defence website

Furze clearance by Department of Defence

In 2009/2010 the Dept of Defence has undertaken furze clearance in a number of areas. This operation has been characterised by the inappropriate methods used to clear the furze. As the soil covering of the plains is very shallow, any archaeological remains are very near the surface and easily damaged. Heavy machinery has been used to physically uproot the furze bushes with immense damage being done to the soil covering of the clearance sites. The driving of heavy machinery on the plains in wet conditions causes perhaps even more damage than the removal of the furze. Protests to the Property Management Branch of the Dept. of Defence about this type of operation have been to no avail.

The Curragh is being encroached upon, sub-divided and damaged on a daily basis. Unless action, and strong action in line with the Task Force’s recommendations, is taken very soon we will have no Curragh as we once knew it.

There are still many wonderful features and views on the Curragh. Here are some. Click on any photo to view slideshow.

See additional posts on damage to the Curragh at:

Report and photographs by A.J. Mullowney