The County Kildare Archaeological Society continued its programme of educational tours in 2014 with a three day visit to Co. Wexford to experience its history culture and the county’s magnificent landscape.  The event took place in glorious sunshine from 15 – 17 May and led by Hugh Crawford, Siobhán McNulty and Finbarr Lambert.   The delightful Whitford House Hotel was the Society’s base for the duration where the members enjoyed excellent accommodation, food and hospitality.

The first major stop on the journey was the historic town of New Ross where the earliest settlement can be traced back to the fourth century and granted a royal charter in 1207.  New Ross is set in beautiful rolling countryside on the mouth of the river Barrow and is Ireland’s only inland port connected to the sea via Waterford estuary.  It has a long history of trade with the outside world and of course with emigration particularly during and after the Great Famine and in this regard, the visit to the SS Dunbrody Famine Ship was of great interest to group.  The ship itself is an authentic reproduction of an actual nineteenth century timber built emigrant ship.  The group had the opportunity to interpret with the help of the costumed re-enactors of the conditions endured by those forced to travel at that time. 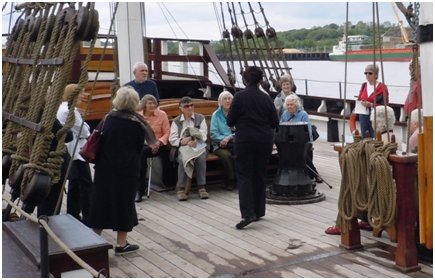 Located close by is the now famous new Ros Tapestry which is the work of one hundred and fifty embroiderers on fifteen large embroidered panels telling the history in thread starting with the Celtic kings up to the Norman conquest.  Here members were coached in the art of embroidery and given the opportunity to place their stitch in the great Tapestry. 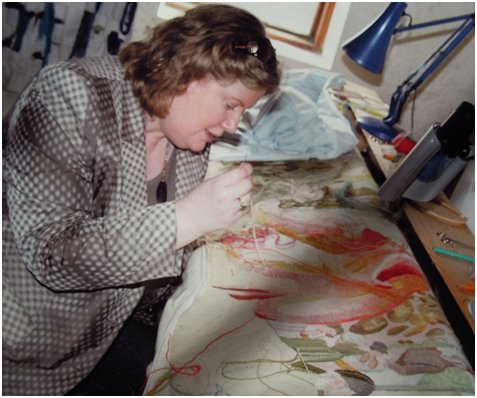 Following a most delightful lunch and refreshments the group continued their journey to the next scheduled stop at Hook Head.  En route the coach passed close to the J F Kennedy homestead and the village of Campile where three people were killed in 1940 following a German bombing during WW2.  Other sites included the Dunbrody Cistercian abbey built in the thirteenth century, Ballyhack castle built c. 1450 and Duncannon fort built in 1588 to defend against the anticipated Spanish Armada.  While logistic difficulties did not permit visits to these important sites the party was fortunate to be able to draw on expertise amongst the travelling party to provide information in respect of the historical importance.  On arrival at Hook Head there followed a visit to the visitor’s centre and a guided tour of the Hook Lighthouse together with an outline of the lighthouse’s aid to navigation and the safety of all mariners.   The lighthouse was built in the thirteenth century by the earl of Pembroke and stands four storeys high with walls up to four metres thick and marks the entrance to Waterford harbour.

The final visit on day one was to the well preserved Tintern abbey founded by the Cistercians c.1200 and named after Tintern in Wales.   Con Manning gave a detailed outline of its history.  What remains consists of a nave, chancel tower, chapel and cloister.  After 1541 it was converted to living accommodation and occupied by the Colclough family from the sixteenth century until the 1960s.   The wonderful walled gardens built by the Colclough family in the early nineteenth century are now in the course of being restored. 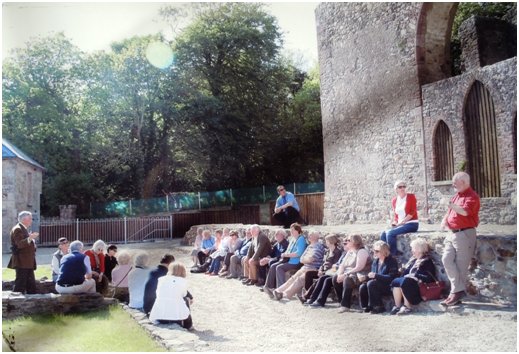 Day two commenced with a visit to the Irish Agricultural Museum at Johnstown Castle.  The museum is housed in the former estate farm buildings and holds one of the most comprehensive displays of farming and rural life in the country.  The Society members were invited to wander and view the large collection of restored tractors, carts, ploughs, threshing machines and dairy equipment.  In addition there were the recreated workshops including blacksmiths, coopers and wheelwrights – all too much to take in on a single visit.  There was also a display of country furniture and farmhouse kitchens through the ages with displays of periods during and after the Great Famine. 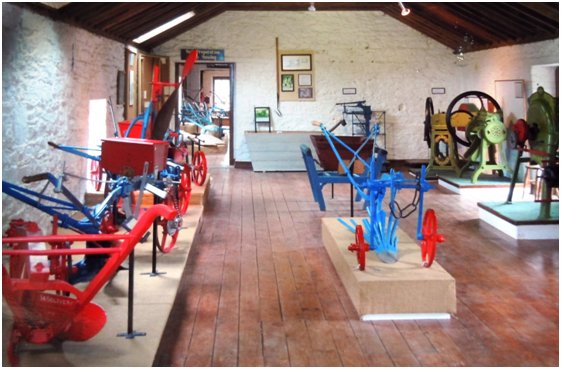 ollowing the visit to the museum many enjoyed a stroll in the grounds including the spectacular ornamental gardens designed by Daniel Roberson (of Powerscourt fame).  The lakes here were created during the landscaping and have Gothic towers constructed at the water edge.  The grounds were carefully planted with over 200 trees and shrubs and many magnificent specimen trees including copper beeches, holm oaks, cedars and redwoods not to mention the huge rhododendrons.   The estate extends to some 400 hectares of which 40 are open to the public with the remainder used for agriculture research.  While a castle has stood on this site from Norman times the present castle dates to the nineteenth century of which Robertson would have been involved in its present design which includes turret and battlement features in its structure. 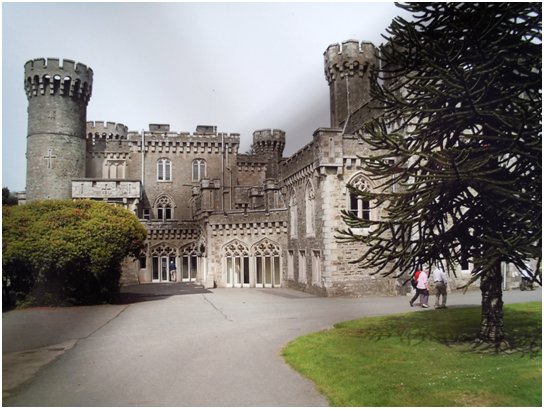 Johnstown Castle is of particular interest to the Society in that, Lord Maurice Fitzgerald, older brother of Lord Walter, gained an interest in the estate by way of a settlement and his marriage to Lady Adelaide Forbes in 1880 and resided at Johnstown castle until his death in 1901.  In 1918, the then four year old Gerald (eighth duke) who was deserted by his father, Edward (seventh duke) at birth, as a ward of court, was allegedly dragged screaming from his show-business mother to be reared by his great aunt Lady Fitzgerald at Johnstown castle.  A visit to the castle was arranged thanks to Mairead Esmonde of Teagasc.  Peter Miller was on hand to conduct the tour during which he outlined its many architectural features and art work. The original castle was built in the wake of the Anglo-Norman Invasion in 1169 by the Esmonde family from Lincolnshire, who remained there until the Cromwellian confiscation.  It was acquired by the Grogan family in 1692, whose descendents remained at Johnstown until it was gifted to the Nation in 1945 in return for tax and other encumbrances.

Having completed the visit to Johnstown castle the party travelled the short distance to Rathmacknee castle where again Peter Miller was on hand to outline its many features which still survive including its multi-stepped crenellations.   The castle is believed to have been constructed around 1451 by John Rossiter after being appointed Seneschal of the Liberties of Wexford.  Having enjoyed the medieval architecture of Rathmacknee castle the party moved on to the village of Tacumshane to view the famous windmill.  Built in 1846 by the millwright Nicolas Moran it is the only surviving complete windmill in Ireland.  One of its unique features is a revolving straw cap designed to catch the wind for its sails.

Following some light refreshments in the local hostelry the outdoor activities were concluded by a visited to the Pugin designed Barntown Church.  The party was warmly welcomed by Fr. Robert Nolan parish priest of Adamstown and Jarlath Glynn, President of Wexford Historical Society who acted as guide for the visit.  The church was solemnly dedicated in 1851 and the architectural style of Augustus Welby Pugin is clearly visible in this beautiful restored church.  Pugin who has been described as ‘a man of genius’ and ‘God’s architect’ is consistent with the stained glass windows, Gothic stencilling and the roof timbers. 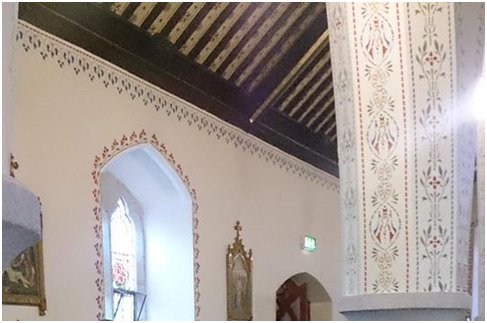 Photograph showing the extent of stencilling

Some members were quick to recall the Pugin works in the banqueting hall of Lismore Castle during the Society visit there in 2012.  There was much debate on the extent of the stencilling as the party returned to Whitford House for dinner. 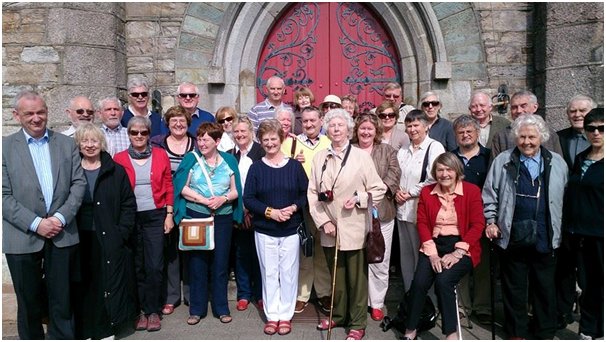 The last day of the Society’s educational tour of county Wexford began with a walking tour of Wexford town led by local historian Monica Crofton.  This historic town dates back to the Viking period with a strong Norman connection and is associated with John Barry the founder of the American Navy.  Monica began her tour on the quays outlining its maritime history including; the Barry memorial, the Ballast bank etc before moving into Main Street and to St. Iberius church where Oscar Wilde parents were married.  This was followed by the famous ‘Bull Ring’ where the once medieval sport of bull-baiting was practiced twice a year.  During the 1798 rebellion the ‘Bull Ring’ became a factory for making pikes and is now the location of the 1798 memorial.  Continuing on the tour the next point of interest was the West Gate Heritage Tower which once guarded the western entrance to the walled town and Selskar Abbey which is one of the oldest sites of worship in Wexford.  It is claimed that Selskar Abbey was built by Alexander Roche following his return from the Crusades, the tower is still intact and the site was once the scene of synods and parliaments. Monica concluded her walking tour with views of the town walls, the ancient streets patterns to mention just a few and of course the modern Opera House. 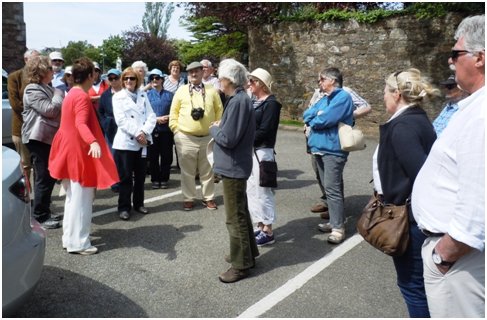 Monica Crofton making a point during the walking tour

The usual celebratery luncheon on the last day of the trip took place in the Selkar Greenacres Restuarant in Wexford.  The reastuarant, which had been selected on the advice of Bernadette Doyle, the Society’s Honorary Secretary, surpassed all expectations in term of ambiance, hospitality, superb food and fine wines.  To add to the occasion, the management, conscious of the Society’s historical significance, displayed the Wexford Pike famous for its use in the 1798 rebellion. The President, Conleth Manning took the opportunity on behalf of the Society to thank the management, chef and staff for the wonderful meal and for their hospitality.   He thanked Hugh Crawford, Siobhán McNulty and Finbarr Lambert for planning and organising a marvelous itinerary and all who had helped in any way to make the tour such a wonderful success for the Society.

On the Journey back to Naas a brief stop was made at Enniscorthy to visit the imposing grey stone Castle and the restored St Aidan’s Cathedral also designed by Augustus Welby Pugin.  The castle, once a Norman stronghold dating back to the early 1200s and built by the DePrendergasts has a long and chequered history.  It now houses the county Wexford Museum.  Over the centuries the castle has been associated with the McMurrogh Kavanaghs, the Franciscan Order, Queen Elizabeth, Cromwell, a prison during the 1798 rebellion and later as a family home until 1951.  The Museum takes the visitor through the various stages of its history and explores the work of the great furniture designer Eileen Gray who was born locally.  Jarlath Glynn was again on hand to guide the party through the magnificent St. Aidan’s Cathedral which was refurbished in 1994 under the guidance of Fr. Robert Nolan (who the party had met the previous day at Barntown church)  at the cost of one million pounds.  Included in the refurbishment was the restoration of the stencilling, painted over during works in 1970 and the Cathedral now reflects the original Pugin style and is a prime example of Gothic Revival ecclesiastical architecture.

The Enniscorthy stop brought this educational tour to an end.  There was a sense of regret due to the camaraderie and enjoyment built up over the three days that the tour was ending for another year and lots of requests that this new annual event be continued.   The leaders paid tribute to the party for their cooperation throughout and more importantly their participation at the various sites.  Siobhán McNulty on behalf of the leaders thanked the management and staff of the Whitford House Hotel for their cooperation both during the planning and afterwards for their wonderful hospitality and exquisite food during the stay.   Siobhán thanked the staff at Greenacres and Kane’s Coaches including Jarek the coach driver during the three days.

We use cookies to ensure that we give you the best experience on our website. If you continue to use this site we will assume that you are happy with it.OkNoRead more