The Society’s annual educational tour this year took place to the Burren in County Clare stopping en-route in Athenry and finishing in Coole Park.  The base for the Society’s fifty members who participated in the four day tour was the Hyland’s Burren Hotel in Ballyvaughan. This hotel is one of the country’s most historic hotels dating back to the 18th century and here the members were lavished with hospitality and good food.

The first stop was in Athenry famous in more recent times for its wonderful hurling exploits, however, Athenry is more than hurling and for many of us we learned of the town almost unbelievable historical past dating back to the 12 century.  After some refreshments the members were met at the Dominican Priory by Jim McKeon who gave a most in-depth talk on this most well preserved medieval town of Anglo-Norman origin in the country.  The features include much of the high medieval town walls, restored castle towers over the medieval streetscape.  Within the walls is the Dominican Priory which Jim has studied in depth and the results of this study have been published by our fellow Society – the Journal of the Galway Archaeological and Historical Society.   This Dominican Priory of SS. Peter and Paul was begun around 1241 under the auspices of Meiler de Bermingham for the townspeople of Athenry and today is a National Monument.  The Priory is without doubt a magnificent gem with all its ornate stone carvings.

Following a wonderful luncheon in the Old Barracks Restaurant, once occupied by RIC and in later years by the reserve defence forces the party moved to the excellently restored Athenry Castle.  The Castle was constructed in three phases and completed around 1240 enclosed by a D shaped wall with round towers at the corners.  The Castle is under the care of the Office of Public Works which has carried out some magnificent restoration works to make the structure so accessible.  Its unique feature included the highly decorative carved windows and doorway generally more likely associated with the early churches and abbeys. During our visit to the Castle Alan Burgess from the Athenry Heritage Centre came along to formally welcome the Society to Athenry and gave a brief outline of Athenry’s historical past.  This included the town’s 15th century stone carved Market Cross, one of the oldest market crosses in Ireland still located in its’ original position. The carvings, while seriously eroded, features a crucifixion scene together with a Madonna and child.  In more recent times, Alan, spoke of how the town has been immortalised in the song ‘The Fields of Athenry’ written by Pete St. John in the 1970s.  Alan was accompanied by Aideen Rynne and together they outlined the significance and history of the famous Athenry Mace and Seal which they brought along for us to see. 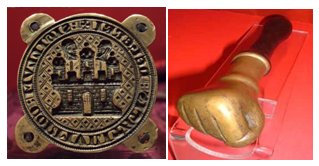 The President, Hugh Crawford, on behalf of the Society thanked both Alan and Aideen for their presentation and also Jim McKeon together with all those in Athenry who had assisted in making this short stopover so enlightening and enjoyable.  In relation to Aideen, the President spoke of her late husband, Professor Etienne Rynne, a former Council member of the County Kildare Archaeological Society and how he had contributed immensely to the Society’s Journal and indeed to archaeology in general.

Following check in at the hotel John Feehan gave a comprehensive and most informative introductory presentation on the Burren to the members.  This dealt with the geological formation of the Burren in the warm shallow seas of the Carboniferous ocean 340 million years ago and how it evolved over the millions of years. Comparisons were made with the Curragh with the difference being that the limestone of the Curragh is blanketed from the glazier debris washed down from the Wicklow mountains.  This presentation set the scene for the next two days, however, it is a challenge for a historian to describe the Burren adequately or accurately and in this regard John will provide a brief outline in the next edition of the Society’s Journal.

Armed with all the information gained from John’s introductory presentation the previous evening and familiarity with the various terms and features of the Burren under John guidance we began our two day exploration of the magnificent landscape.  We were spoiled by the number of important sites on the itinerary and these included:

This brought the visit to the Burren more or less to an end. For more information on this wonderful landscape it is highly recommended that you acquire a copy of the publication of ‘The Book of the Burren’ with the foreword by Dr. Pat Wallace and a number of articles by John Feehan. Throughout the stay the members were sustained by the excellent food and hospitality at our base in the Hyland’s Burren Hotel, Ballyvaughan together with superb lunches on day two in Cassidys Pub in Carron and on day three in the Wild Honey Inn, Lisdoonvarna.  Day three was completed with a visit to Dunguaire Castle built in 1520 which takes its name from the nearby ancient fort of Guaire, King of Connaught.  This was followed by an enchanting evening and a superb banquet.

Before departure on the final day from Ballyvaughan and the Burren, the President thanked David and his mother Madeleine for their hospitality during the stay by the Society and for all their assistance during the planning stage.  The activities began with a visit to Kilmacduagh Monastic site near Gort.  This monastic complex was founded by St Colman MacDuagh and known as the ‘seven churches’ in view of the number of churches within the complex.  The Society’s Past President, Con Manning was on hand to provide guidance and to point out all the exquisite ornate carvings and monuments to be found within the various buildings.  While it is difficult to distinguish between the architectural or archaeological merit between all the structures within the complex, those in the Cathedral itself, are amazing.  The Round Tower, believed to date to the 10 century, dominates the landscape and can be seen for many miles away and it is regarded as Irelands tallest and near perfect round tower. It measures approximately 34 metres high with a circumference of 18 metres. Its unique feature is its visible lean to the south-west, however, perhaps not as significant as the leaning Tower of Pisa.  The height of the doorway of approximately 7 metres above ground level was the subject of much speculation, how it was accessed, and what use was made of the Tower in those days.   In 1879, at the behest of Sir William Gregory (husband of Lady Gregory), who agreed to finance the works, the Board of Works, carried out major repairs to the tower and further works were carried out again in 1971.

The celebratory meal took place in the charming Lady Gregory Hotel in Gort.   The hotel is locally owned by the O’Grady family and together with their staff they prepared and served a most beautiful gourmet meal with the utmost hospitality.  The President in his address thanked the family and their staff for the wonderful meal and wished them every success in the future.  He went on to pay tribute to all those who had worked so hard to make the tour so enjoyable and successful, the officer holders, council members and members of the Society, especially all who had taken part in the tour. A special word of thanks was reserved for Siobhán McNulty and John Feehan who shared the leadership with him on the occasion of this tour and also Kane’s Travel for a beautiful coach and an excellent driver.

Before returning to Kildare there was a brief visit to Coole Park, once the home of Lady Gregory.  At Coole Park the members were welcomed to the Visitor Centre where they availed of the audio visual presentation.  This gave an overall view of the Irish Literary Revival movement at the beginning of the 20 century, when Coole was the home of Lady Gregory, the co-founder of the Abbey Theatre. Writers and artists such as William Butler Yeats, George Bernard Shaw and many others were inspired by Lady Gregory and many of these individuals carved their initials on the autograph tree which still stands in the walled garden. One of W.B. Yeats most famous works, “The Wild Swans of Coole” was inspired by his visits to Coole Park.  This was followed by a group photograph taken on the steps leading up to the former home of Lady Gregory and many then took the opportunity to visit the walled garden and view the autograph tree.

Hugh, John and Siobhán would like to thank all who joined them on this trip for their cooperation throughout, their contributions, photographs and participation in the visits to the various locations.