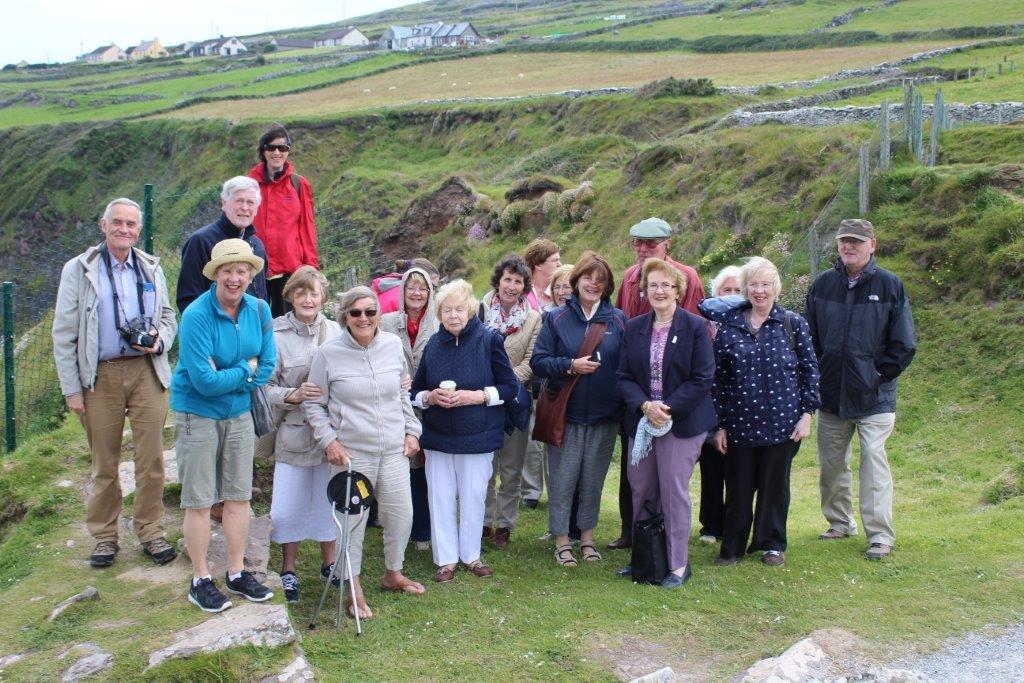 A large number of Society members have recently returned from a most successful trip to North Kerry.  The historic Listowel Arms Hotel in the heritage town of Listowel was the base for the Society for the duration of the four day stay where the members were lavished with hospitality and good food.  The town is known as the ‘Literary Capital of Ireland’ so the first visit of the day was to the Kerry Writers Museum which houses the Seanchaí – Kerry Literary & Culture centre. Here the Society was entertained by actors bringing to life the works of such esteemed writers as John B. Keane, Bryan MacMahon, George Fitzmaurice, Brendan Kennelly and Maurice Walsh.  A visited to Listowel Castle followed which was one of the last bastions of the Geraldine (Fitzgeralds) in the war with Elizabeth I to be subdued.  Constructed in the 15 century, it is an excellent example of Anglo-Norman architecture which has received in recent years some magnificent restoration work carried out by the Office of Public Works.  The Castle retains two of its four towers and a unique feature of an arch below its battlements. 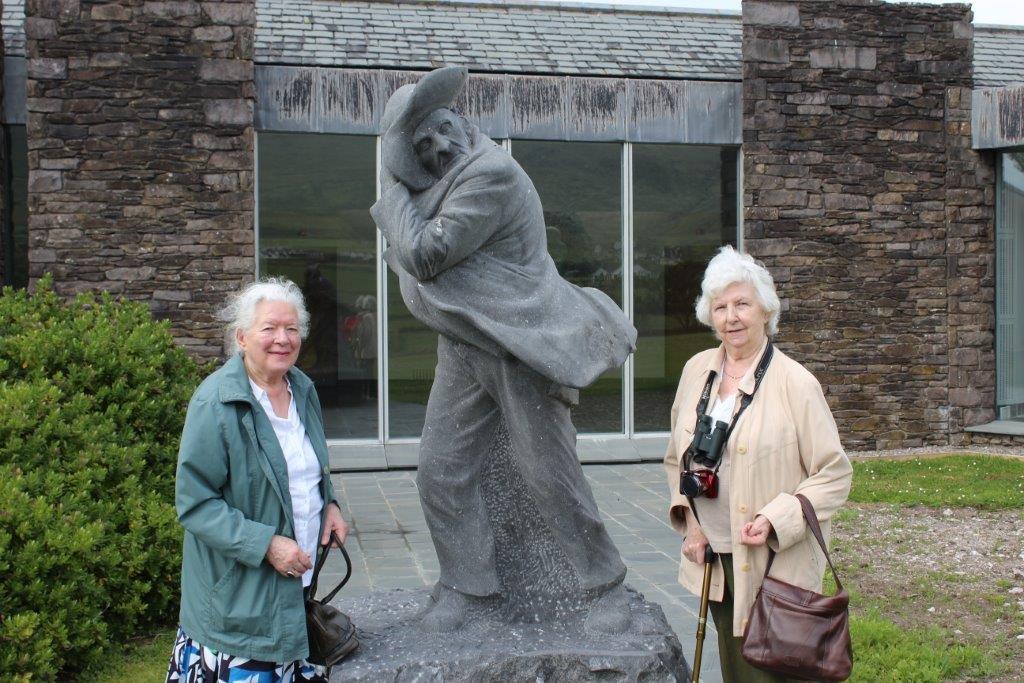 Following luncheon in the Writer’s Museum the party was taken on a town walk by the well known local historian and writer Vincent Carmody.  Vincent is the author of; Listowel – Snapshots of an Irish Market Town, 1850-1950 in 2012, which is a ‘must read’ and a collector’s item for social and local historians.  Vincent took the party back in time with his comprehensive history of the town, its inhabitants, and its hinterland, from the 19 century up to the present day.  Just as the town walk ended a number of the members were greeted by the ‘Rose of Tralee’ sporting some magnificent Newbridge Silver jewellery.  Afterwards a number of the party adjourned to John B. Keane’s for some refreshments where the ‘freedom of Kerry’ was bestowed on the Society by Billy Keane.

Later at Dinner the President, Hugh Crawford, welcomed special guests; Maureen Hanifin and Anne Myles; President and Honorary Secretary respectively of the Kerry Archaeological & History Society.  Maureen formally welcomed the Society to Kerry with the wish that the visit would be rewarding and memorable. She went on to outline the ethos and activities of their Society including the production of their annual Journal and Magazine.  The President made a presentation to Maureen on behalf of the Society as a token of our appreciation of her Society’s warm welcome and guidance in the planning of the trip to Kerry.  Maureen returned the compliment with a presentation of a copy of her Society’s Magazine to all present.

To conclude the first day activities a most enjoyable special entertainment evening which included storytelling, dance, and music, was organised at the Writers Museum for our  members. 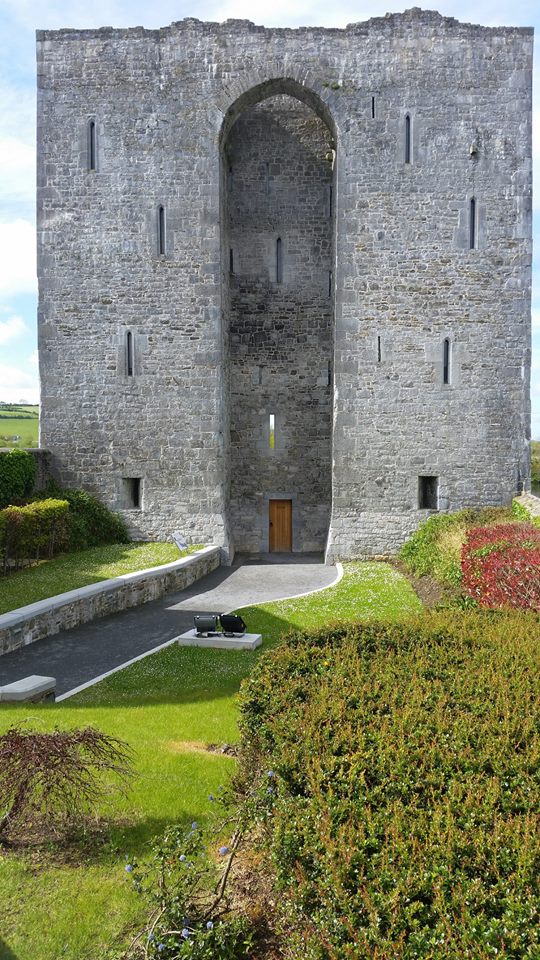 The second day was spent on the Dingle Peninsula or in our native language; Corca Dhuibhne where there are more than two thousand archaeological sites recorded. The Society’s guide for the day was the highly regarded archaeologist, Isabel Bennett, who lives in the heart of the Peninsula.  Isabel brought the Society members through time that shaped this magnificent area from the Palaeolithic, Mesolithic to the Neolithic age and almost to the present time where the area’s beautiful scenery attracted the film makers for such films as ‘Ryan’s Daughter’ and ‘Far and Away’.

The first stop was at the Dúnbeg Fort and Visitor Centre where the very informative audiovisual recording the history of the Fort and surrounding area was viewed.  This was followed by a talk and question session with Isabel on the site of the Promontory Fort during which the significant archaeological aspects were explained. This magnificent stone structure, which is located on the cliff face projecting on to Dingle Bay, is now in serious danger from erosion resulting from storms some of which occurred in recent times.  Later as the Coach made its way along the narrow scenic road towards Dún Chaoin (Dunquin), Isabel pointed out examples of ‘clocháin’ or ‘beehive huts’ together with many other significant archaeological features which are unfortunately inaccessible at present. As the Blasket Islands came into view their individual names were identified together with a brief history.

At the Blasket Centre in Dún Chaoin (a captivating heritage centre at the tip of the Peninsula) a superb luncheon was served.   During the visit to the Centre there was the opportunity to learn about the community who lived on the remote Blasket Islands, their struggle for existence, their language and culture, and of course details on the author and seanachaí Peig Sayers who was born in Dún Chaoin.  Leaving the Blasket Centre en route to Ballyferriter were further views of the Blaskets and Isobel pointed out some of the locations used in ‘Ryan’s Daughter’ as the views of this magnificent landscape just got better and better.  This area itself has evidence of very early farming settlement. 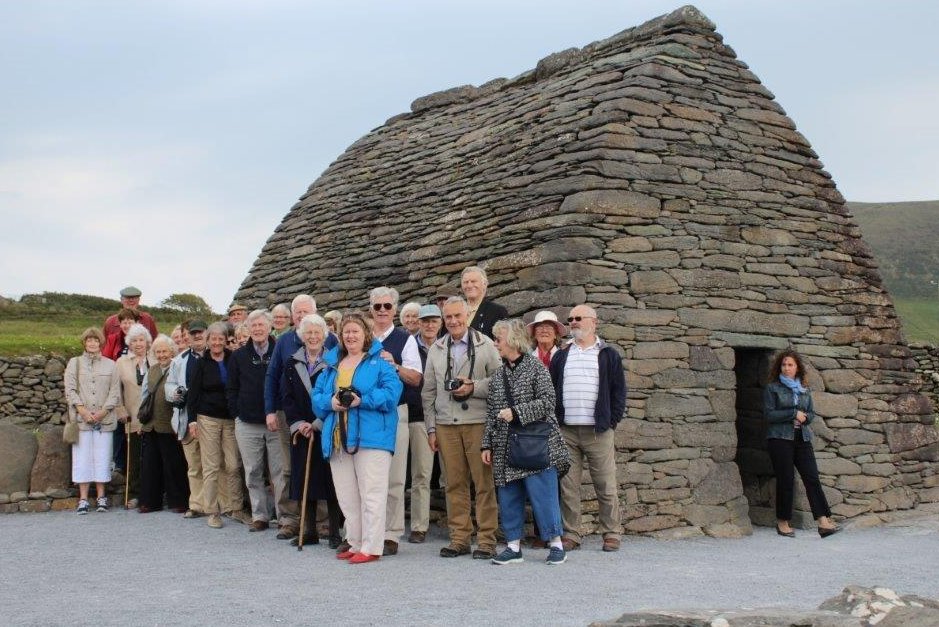 The next stop was at the Reask Monastic Site where the Society’s Con Manning commenced his archaeologist career.  This site, which is a National Monument, is an archaeological treasure dating back to the 6 century with many wonderful features.  These include the ruins of several stone huts or clocháin, an oratory and a number of other stone structures.  There are also a number of cross slabs and a beautifully decorated pillar stone having dimensions approx. 1.6 metres high x 0.6 metres in width x O.25 metres thick.  The site is truly magnificent and the many features are just too many to record in this account.

After Reask the group then moved on to Gallarus oratory, another archaeological gem and one of Kerry’s most famous land marks. This untouched stone structure is constructed with local red sandstone in the shape of an upturned boat to a height of 5 metres.  The monument is in the care of the Office of Public Works and it is very well preserved, however, there are differences in opinion as to its exact date with some experts placing it in the 7 century while Harbison suggests it could be as late as the 12 century.  Interestingly, a former President of this Society, Harold G. Leask in his capacity as an Inspector of Monuments, suggested that a lime mortar may have been used in its construction.

The visit to the Dingle Peninsula ended with a visit to the ruined 12 century Romanesque Church at Kilmalkedar.  The most interesting features of the church are obviously the beautiful carved Romanesque doorway and the blind arcading inside the Nave.  There are many other interesting artefacts including the alphabet stone which has been moved into the church next to chancel arch.  Outside there is a holed Ogham stone, a sundial and a large stone cross.

On the return journey to the hotel, Isabel Bennett took leave of the group in Dingle but before her departure, the President thanked her for her wonderful guidance throughout the day on the Dingle Peninsula. 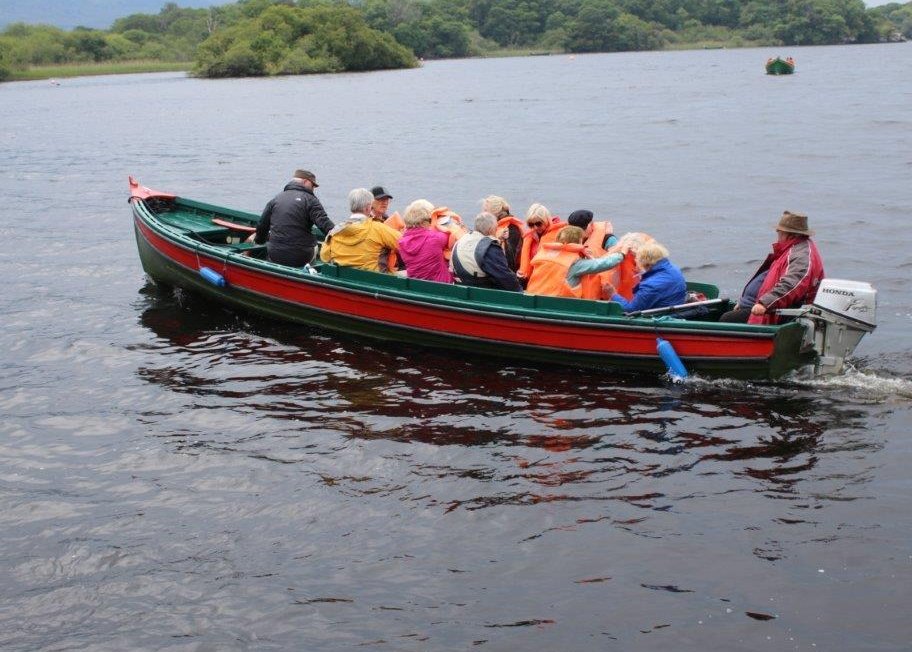 Day 3 was assigned to Killarney starting with Muckross House, Garden, and later a self guided tour of the traditional Farm.  The day began with a guided tour of the magnificent House which is located close to Muckross Lake (the middle lake of the three Lakes of Killarney). The guide explained that this Victorian mansion was designed by Scottish architect William Burns for the Herbert family and completed just before the Great Famine in 1843.  The guide mentioned how the Herberts in search of a ‘Title’ spent a fortune on having Queen Victoria stay with them, which she did for two nights in August 1851.  Unfortunately, no Title came their way and the outlay on the Royal visit did nothing to improve their finances so they were forced to sell.  It was acquired by Lord Ardilaun in 1899, changing ownership again in 1911, and eventually in 1932 together with 11,000 acres was gifted to the Irish State and became the first National Park.

Following luncheon at Muckross the party made the short journey to Ross Castle and from the lakeside were transported in a number of small boats specially laid on to Innisfallen Island.  Here many of the members were overcome with the serenity of the Island.  The Island is situated on Lough Leane, the largest of the tree Lakes of Killarney.   A monastery was founded there by St. Finian in the 7 century becoming a seat of learning and was occupied for some 900 years before being dispossessed by Queen Elizabeth I. The Island has the remains of a large 12 century Augustinian Priory and a beautiful small Romanesque Church.  It was on this Island that the Annals of Innisfallen were written by the monks recording early Irish history and these can be viewed in the Bodleian Library in Oxford.

The day’s activities finished with a visit to Ross Castle regarded as a 15 century tower house built by the local chieftain O’Donoghue Ross.  The castle is operated by the Office of Public Works and has been extensively restored. 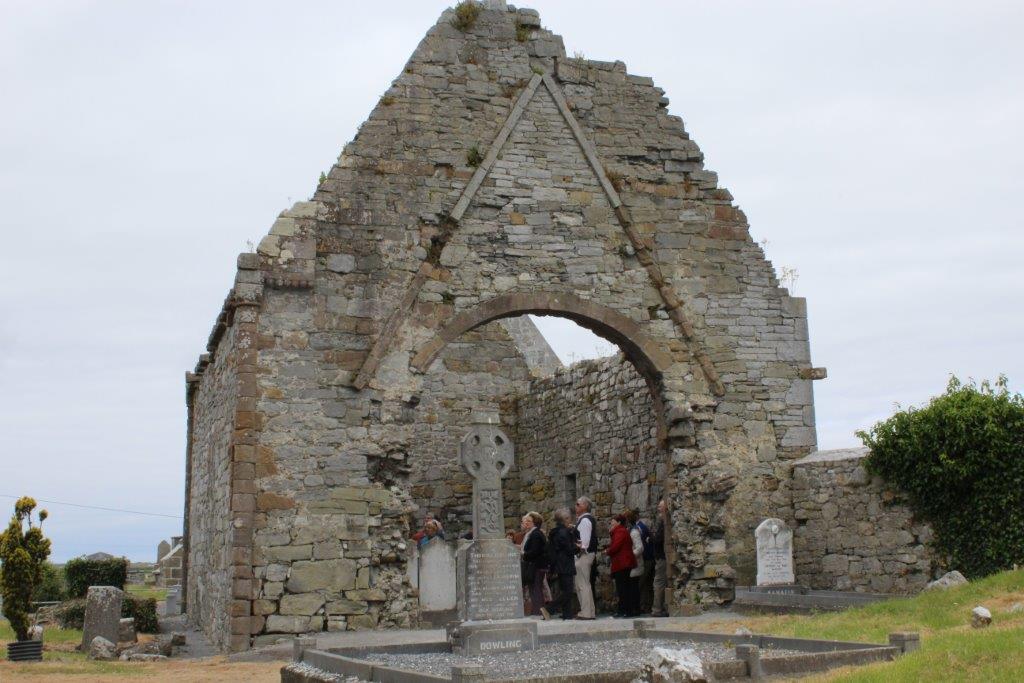 The Society’s trip to Kerry concluded with a visit to the historic town of Ardfert which is said to be the medieval capital of Kerry. St Brendan ‘The Navigator’ is believed to have established a monastery in Ardfert in the 6 century.  On this site there are three medieval churches, one being the Cathedral which dated from the 12 to 17 century. Its main features include a magnificent Romanesque doorway and a spectacular row of nine lancets in the south wall.  One of the smaller churches provides a sample of late Romanesque while the other has an interesting carving of a Wyvern on a window.   Time restrictions permitted only a brief visit to the 13 century Franciscan Friary located a short distance away from the Cathedral.  This Friary is a most striking structure which incorporates a substantial six-story tower at its west end and said to have been built in the 15 century.  There is a stone carving of two heads high up on the west wall of this tower.  The Friary has many other impressive features including a large cloister, lancet windows and tomb niches.  Following the defeat of the Irish chieftains the Crosby family were granted a substantial area of land by Queen Elizabeth I and they developed a large mansion adjoining the Friary.  The Crosby family were obviously very influential, eventually becoming the earls of Glandore by the late 18 century, and by 1899 they had an estate of 10,000 acres.  The family left the area in the 1920s and sometime later their mansion was burned during the Civil War.  The lands are now divided and there is little evidence of their once majestic mansion and walled gardens, however, the castellated gate in the town, which was once one of the estate entrances remains.

The customory celebratory luncheon on the last day took place in the charming Dunraven Arms Hotel in Adare in the heart of one of Ireland’s most picturesque villages. The superb meal served with the utmost hospitality was in keeping with the old-world charm of this former 18 century coach house.  Afterwards the members had time to stroll through the village and enjoy its architectural wealth including its thatched cottages, stone buildings and medieval monasteries.

Hugh, Siobhán and Bernadette would like to thank all who joined them on this trip for their cooperation throughout and their participation in the visits to the various locations. 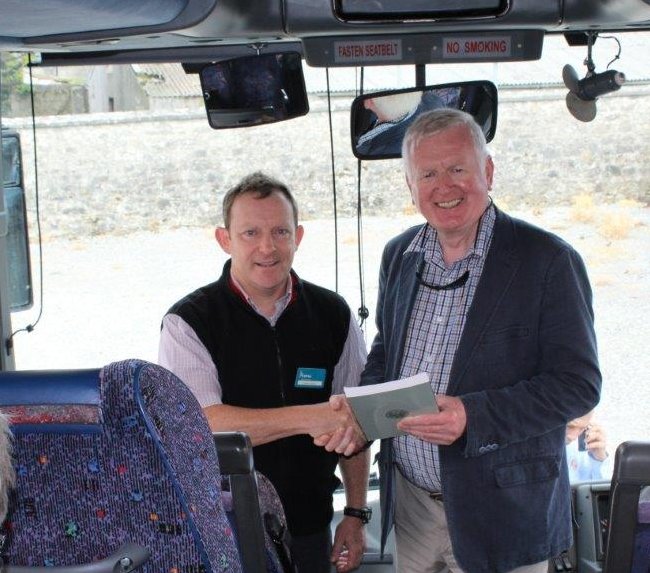