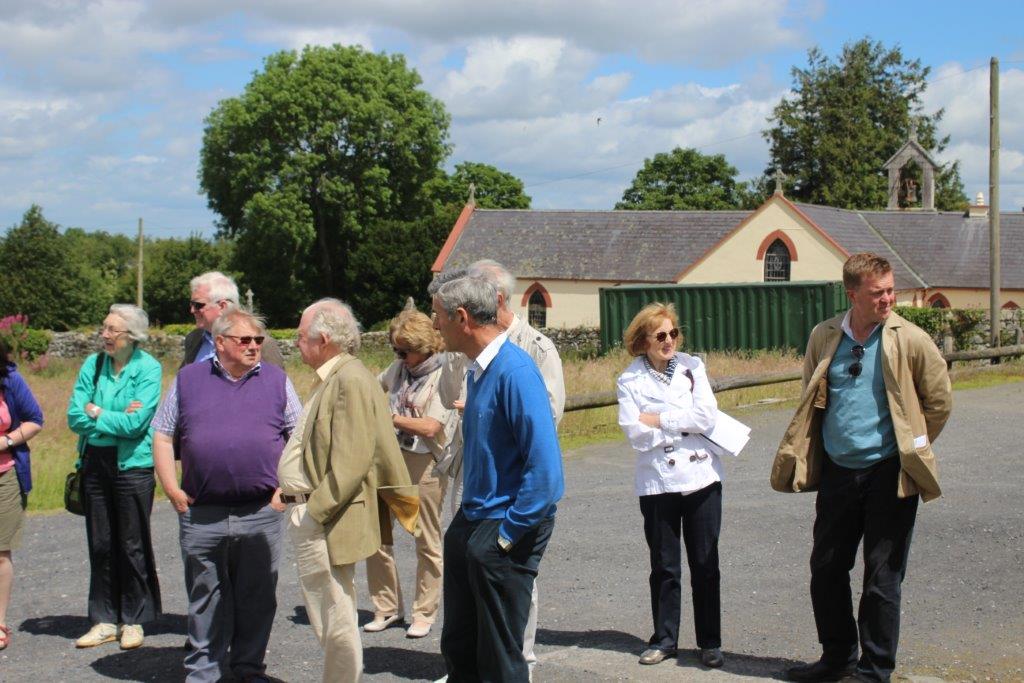 On Sunday 28 June a large number of Society members gathered in the picturesque County Carlow planned village of Myshall, in the shadow of Mount Leinster.   The purpose was for the planned visit to the Adelaide Memorial Church in Myshall and a visit later to Huntington Castle in nearby Clonegal. 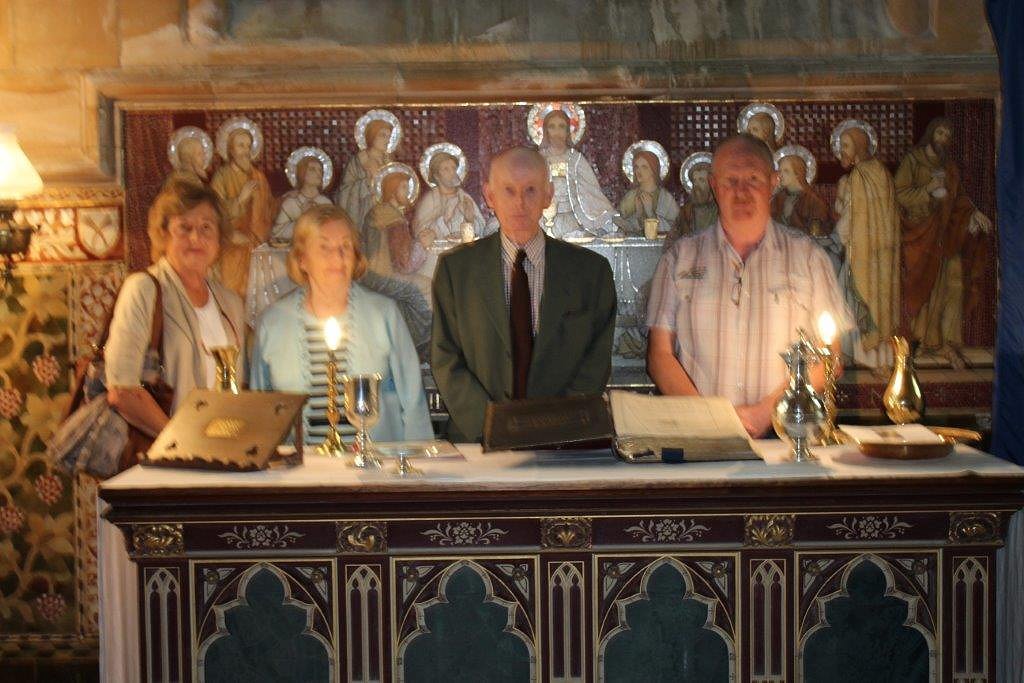 Assembly was at the local community centre, which was once the site of the coach house and yard of the Cornwall Brady Estate.  The ‘big house’ known as Myshall Lodge which once adorned the area was built by Robert Cornwall, a solicitor from Co. Tyrone, who acquired some 1,200 acres in the area during the latter part of the 18th century.  The male line of the family died out with the last descendant leaving Myshall in 1915 and the house was burnt down in 1922 during the Civil War.  Nothing remains to mark the once Myshall Lodge only some surrounding walls and two monkey puzzle trees.  There is a striking Celtic cross nearby which, it is said, is the burial place of the family’s pets. 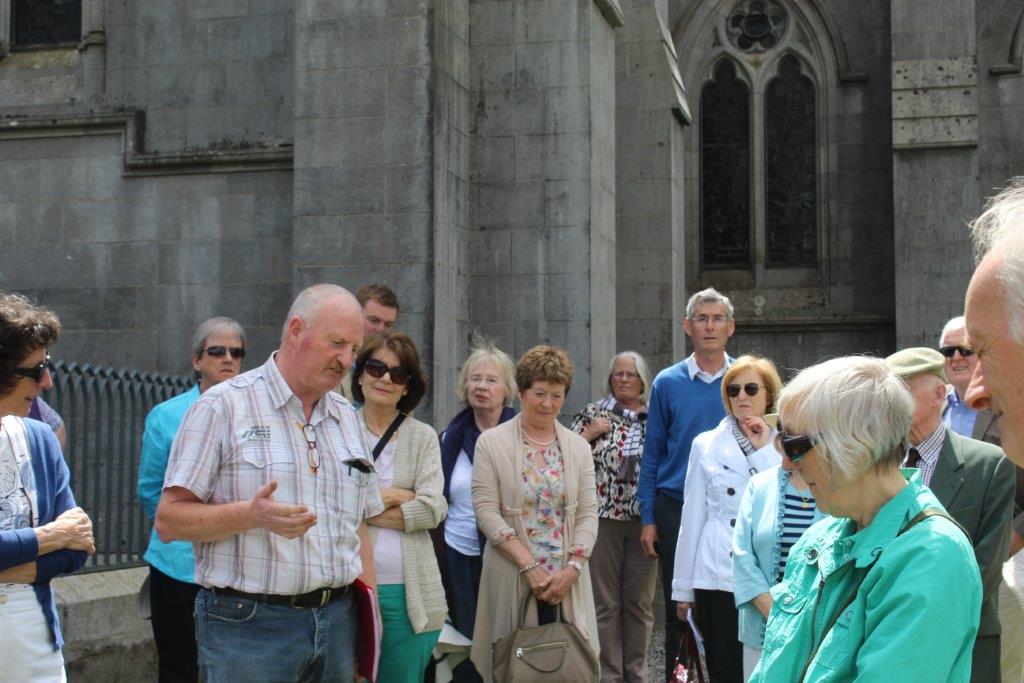 The Society’ guide for the day was John Kelly who is also the Sacristan of Church of Ireland Adelaide Memorial Church of Christ the Redeemer in Myshall.  John provided the members with a most informative background to Myshall and the wonderful cross community spirit of cooperation that currently exists with the help of Muintir Na Tíre.  The members heard about the local involvement in the 1798 rebellion, the sparing of some locals involved in the rebellion and the building of the Croppy road to take traffic away from passing too close to Cornwall’s home. The members also heard of recent events connecting St Columbanus with Myshall and of the bequest of a famous local Doctor Joseph Byrne which provides for free school books for the local children. 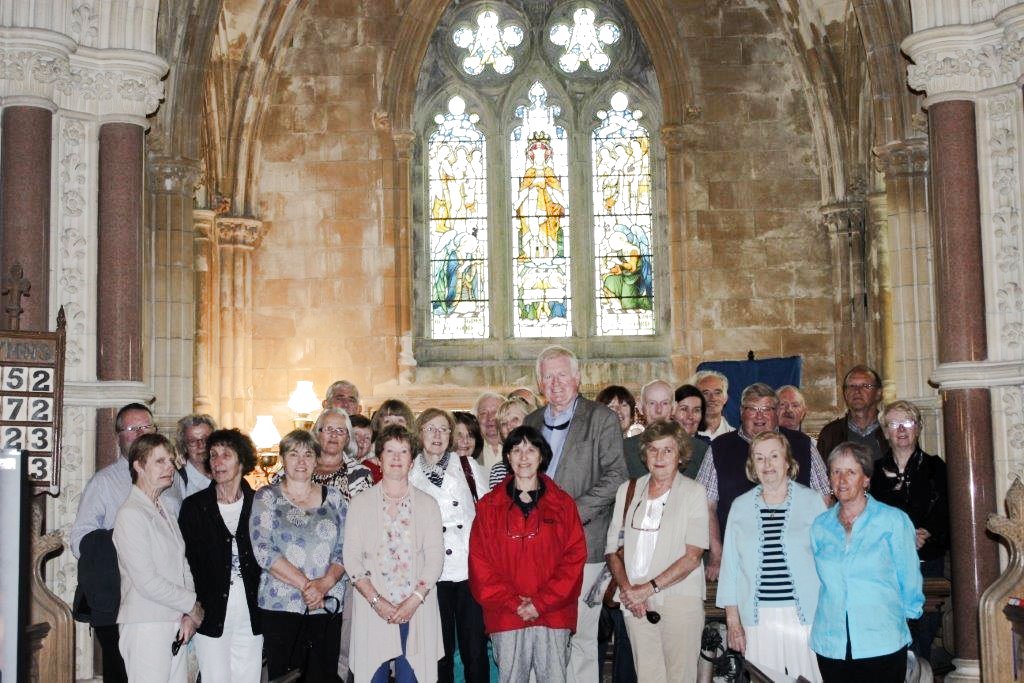 However, the highlight was the visit to Adelaide Memorial Church described as an architectural gem and is the result of a love story that ended in tragedy. Constance Duguid the daughter of a Dover-based businessman, who had planned to marry a member of the Brady family from Myshall Lodge, died in 1887 following a horse riding accident (or was it an accident? John referred to an anecdotal account suggesting something more sinister may have happened).  Constance was buried in Myshall and some years afterwards, when her mother Adelaide died, she was buried with her daughter.  Afterwards, when John Duguid observed that the memorial over the grave was deteriorating under Irish weather conditions, he employed G. C. Ashlin to design and build a church that would protect the monument, while at the same time be a memorial to his late wife Adelaide.  The design of the church is similar to Salisbury Cathedral using Stradbally limestone and local granite.  This church replaced the earlier Church of Ireland which had been built in 1811 with funds from the Board of First Fruits.  John Duguid died in 1912 before the church was consecrated, nevertheless, his ashes were interned with his wife and daughter. 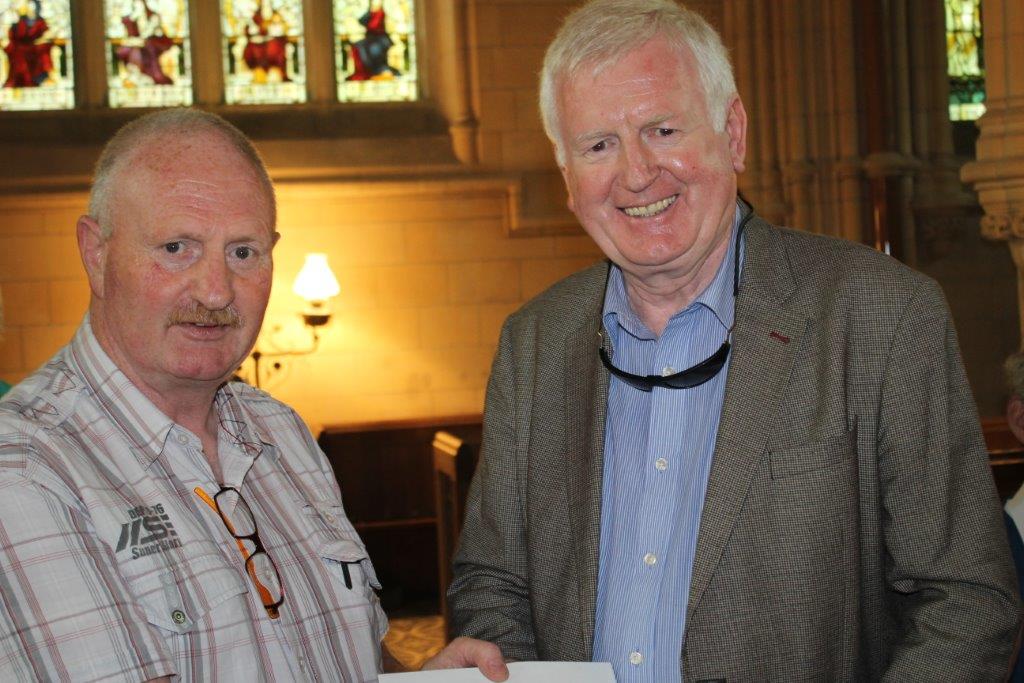 Continuing his guided tour, John pointed out the planting arrangement of trees to coincide with the building of the church including the usual churchyard Yew trees and in particular (rare to Ireland) two Californian Redwoods.  The interior of the church is an ecclesiastical gem with many ornate features from wood carving, marble, ironwork, mosaic and stained glass windows all magnificently coordinated and finished to give a special spiritual effect.

The visit ended with the President thanking John for his wonderful informative afternoon and he presented him with a donation on behalf of the Society towards the church’s refurbishment fund. 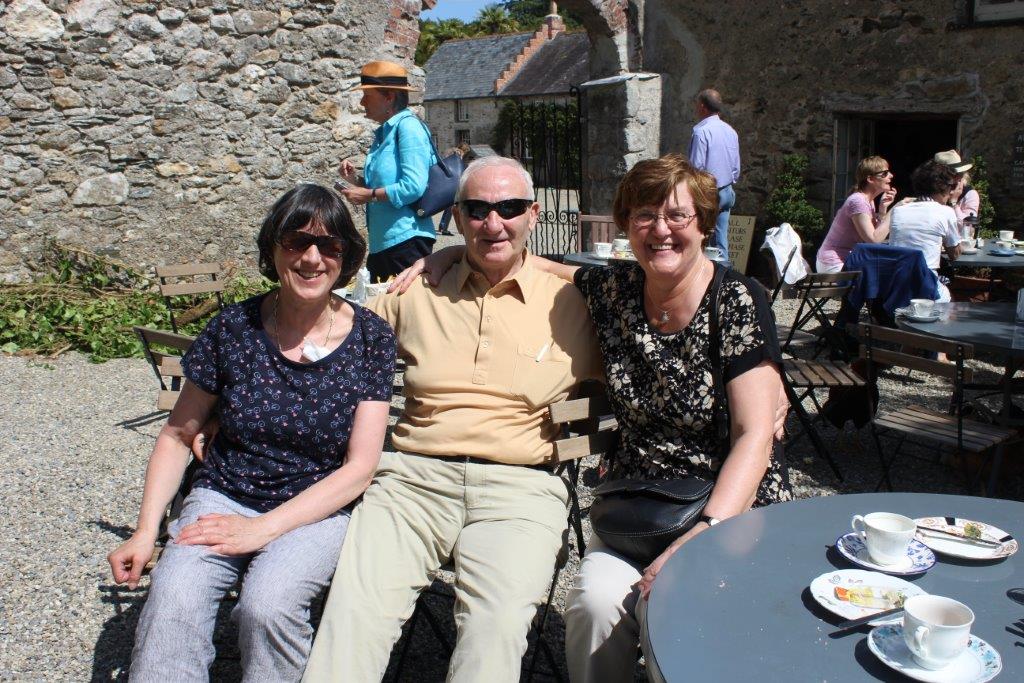 Having exhausted the attributes of Myshall the convoy of members moved on to Huntington Castle, in Clonegal, which is another one of County Carlow’s picturesque villages close to the border with county Wexford under the shadow of the Blackstairs mountains.  Huntington Castle, currently the home of the Durdin Robertson, descendants of the Esmondes, is a freestanding four-bay three-storey over basement tower house.  It was built in 1625 by Sir Laurence Esmonde as a garrison on the site of a former 14 century abbey and stronghold.  It was also occupied by Cromwell on his way to Kilkenny.  Eventually, the family converted it into a family home.  Over time, many generations of the family added various extensions, such as a projecting porch and bow to the rear, a seven-bay two-storey wing, conservatory, and a crenellated parapet and bartizans giving the effect of a truly unique and interesting building.

The Esmondes first came to Ireland at the end of 12 century, Sir Laurence, having replaced his Catholicism with the Protestant faith, was an enthusiastic soldier in the service of the Crown and in particular, Elizabeth I, dealing steadfastly with his Queen’s opponents in Connaught.  To complicate matters he was married to the Catholic Ailish O’Flaherty, grandaughter of Grace O’Malley – the Pirate Queen and they had a son together called Thomas. Ailish absconded to her family in Connaught and took her son with her in order to protect his religion.  Sir Laurence did not seem to mind and found himself a new wife.  Sir Laurence who had been raised to the peerage as Baron Esmonde did not admit legitimacy of his son Thomas and on his death in 1646, the title became extinct.  However, Thomas did succeed to the family estates of Wexford and so began another branch of the Esmonde dynasty with their seat at Ballynastragh, Gorey where their descendants served as Members of Parliament in Westminster and in Dáil Éireann.  Meanwhile, ownership of Huntington passed down the female line by marriage to Durdin and then to the present family name of Durdin Robertson and currently to Alexander who was the Society’s host for the visit. 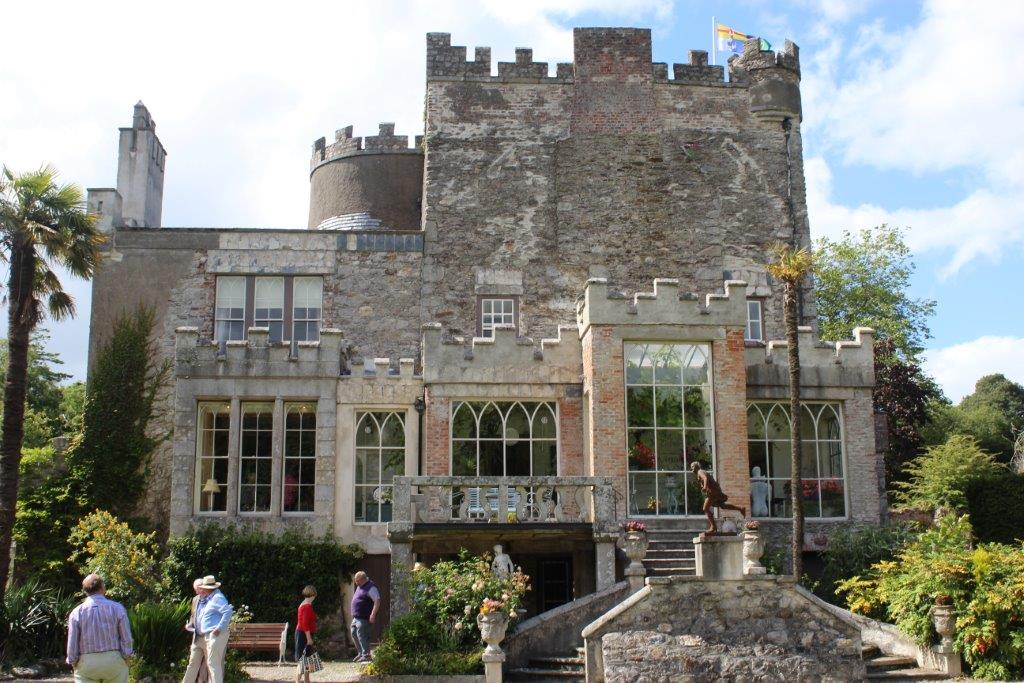 Welcoming the members, Alexander, the current occupier, began the tour of the castle in the large wooden hallway. He spoke of its early defensive attributes such as a well that could supply water in times of siege and the strength of the walls.  In the hallway there is a magnificent open-hearth fireplace and the walls are covered with a variety of antlers, alligators and bison. There were displays of early weapons but the size of the protection armour drew particular attention. There were many magnificent artefacts and furniture on display including the dining room with its magnificent oak-leaf table, kitchen appliances, wooden and plaster panels, family portraits, a baby chair, hand woven tapestries – all too much to take in on a single visit. The cellar is also of great interest with the original wooden beams of the abbey very much on display.  This area was once the dungeon and in more recent times has been converted into a temple to Egyptian goddess Isis.  Alexander went to great length to explain the different aspects of this new religion with which some members of the family had an association. His young son rang the bell associated with the religion and its tone was of particular interest to most and very much the subject of debate.  Lastly there is the conservatory which boasts a vine claimed to be descended from the vine presented to Anne Boleyn by Cardinal Wolsey. 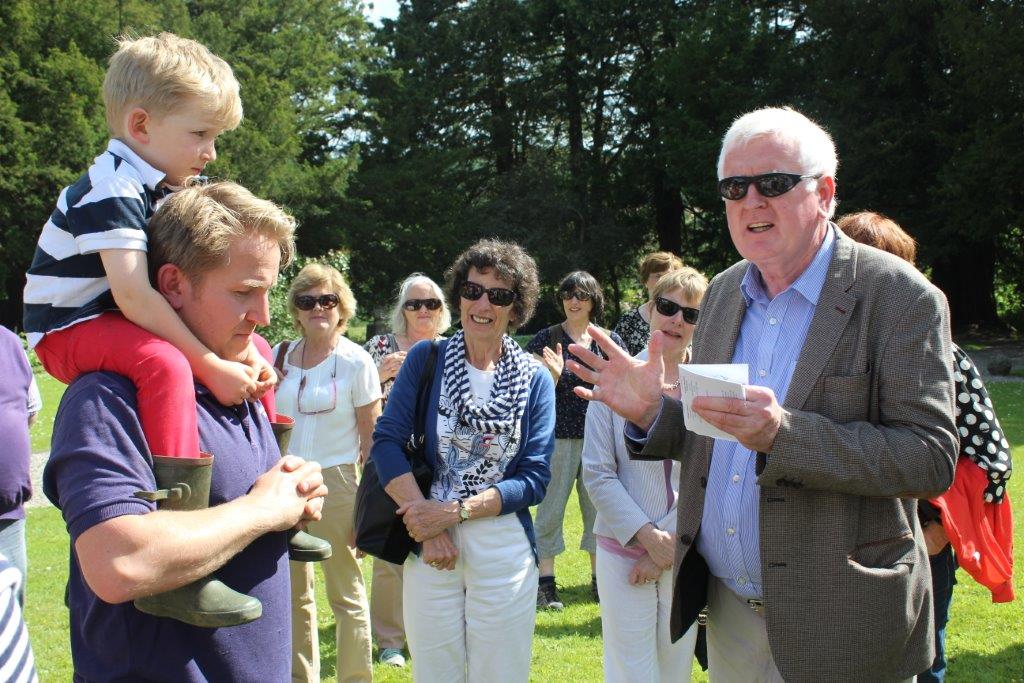 The visit to Huntington ended with a visit to the magnificent gardens which were in the main laid out by the Esmonde family in the 17 century.  Here Alexander took his leave after the President had thanked him on behalf of the Society for his wonderful tour and talk.  Afterwards many of the members spent the rest of the evening admiring the wonderful layout, walks, the display of flowers, shrubs and the magnificent ‘champion’ trees.