The graveyard at Great Connell is almost all that remains to remind us that there was once a large Augustinian Abbey at this site which dated back to 1202 A.D. The County Kildare Archaeological Society were responsible for removing the Walter Wellesley Tomb to Kildare Cathedral for safekeeping in the 1970’s. The Society returned to the site in April 2008 to record the transcriptions which are listed here. Other pertinent information such as size, condition and iconography were recorded, as well as individual photographs of each stone and the recording process, and this information is available to researchers at the County Library, Newbridge. The transcriptions were taken from 34 individual extant gravestones (two in one railed off grave marked 4 (a) and 4 (b) but remainder are separate). The general condition of the gravestones was remarkably good considering some of the dates. There are other stone markers in the graveyard without inscriptions and these are also recorded on the accompanying map. 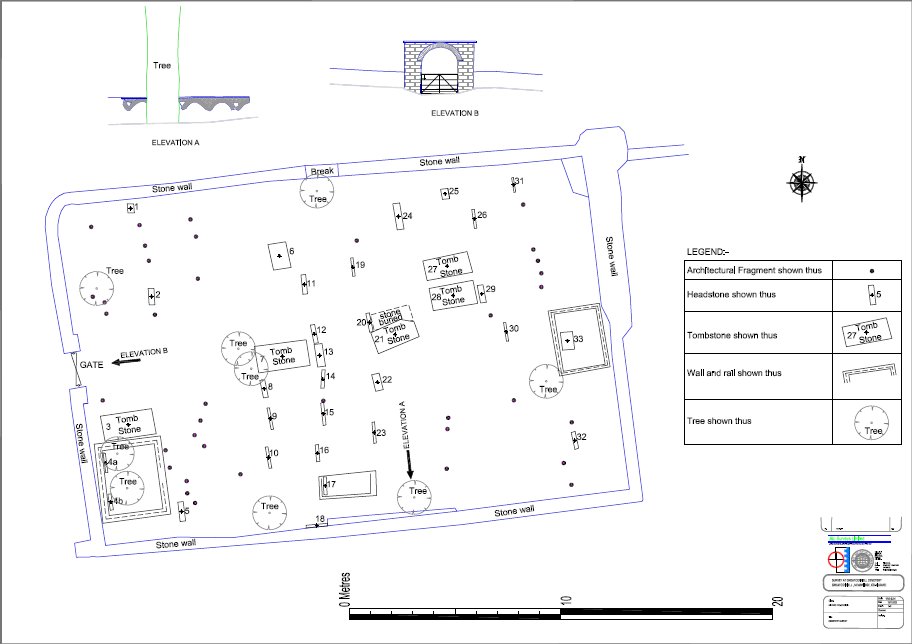 Jesu[s] Mercy / ihs / ERECTED BY / MR. PATRICK HANLON / OF NEWBRIDGE IN MEMORY OF HIS BELOVED / DAUGHTER KATE WHO DIED 4TH APRIL / 1864 AGED 23 YEARS / AND OF FOUR OF HIS BELOVED CHILDREN / WHO DIED YOUNG. / HERE ALSO LIE THE REMAINS OF HIS BROTHER / JOHN HANLON OF TANKARDS GARDEN

[2nd plaque on base]

WHO ALL DIED AT PIERCETOWN LODGE

This Stone Was Erected / By the Rev. Nicholas Flood / In Memory of His deceased / [F]riends particularly his un- / cle Christopher Flood late  / of Newhall who died on / the First of May 1780 aged / 66 years /

May they rest in Peace

[NB: Cross on rear with IHS]

ERECTED By MARY FOSTER in memory / of her beloved Husband / ALEXr PAUL FOSTER / this good man who during the / greater part of his life had been a / member of the society of friends, em- / braced the antient faith, on the 25th, Jan / 1839 in which he died a firm and sin- / cere believer: on the 23rd April 1844 at / Newbridge Barracks, in the 67th. year / of his age and 5th, of his Conversion / esteemed and regretted by all who knew him / Requiescat in pace. Amen

IHS Gloria in excelsis Deo. / This stone was Erected by Edwd Flanagan / of Fishamble St in the City of Dublin in / Memory of his beloved wife Rose Flanagan / who departed this life December 17th 1822 / Aged 50 years / Also three of Their Children who / died young

The Society would like to thank Des O’Leary and the staff of Kildare County Council who cleaned up the graveyard prior to the arrival of the Society and Rev. John Marsden who joined the Society for a prayer to all those buried in Great Connell graveyard. Huge thanks to Bridget.

The graveyard mapping was commissioned by Bridget Loughlin and carried out by J&L Surveys Ltd.