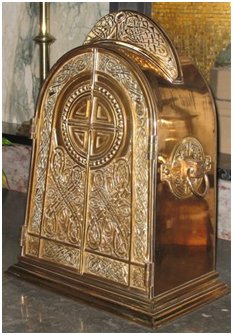 In today’s (St. Brigid’s Day) newspaper we read that a thief stole a rare and valuable shrine, which normally contains a relic of St Brigid, as parishioners prepared for the patron saint’s feast day (Irish Independent, 1/2/2012). There is an interesting story as to how the relic of St. Brigid came to Killester.

After St. Brigid’s death, probably sometime in the years between 521 and 528, the monastery founded by her at Kildare flourished. The first Life of St. Brigid was written not much later than 650, and perhaps even within a hundred years of her death. The author was a monk of the foundation in Kildare named Cogitosus. The “Life” was not really a biography as we would understand it, but rather a compilation of stories of St. Brigid. It gives us a fascinating glimpse of life in Kildare some 1400 years ago. In the Life Cogitosus, amongst other things, describes the great church of Kildare where the bodies of Saints Brigid and Conleth were:

“laid on the right and left of the ornate altar and rest in tombs adorned with a refined profusion of gold, silver, gems and precious stones, with gold and silver chandeliers hanging from above and different images presenting a variety of carvings and colours”

For 150 years or so life was peaceful in Kildare, but then the Annals record that in the year 836 a Danish fleet of 30 ships arrived in the Liffey and another in the Boyne. “They plundered every church and abbey within the territories of Magh Liffe and Magh Breagh. They destroyed the town of Kildare with fire and sword, and carried off the shrines of St. Brigid and St. Conleth.”

It is said that, in fact, in the previous year (835), the remains of St. Brigid were removed for safe keeping to Down. However Down also suffered from the “Danes”. Accordingly her body was removed from Down and buried in a place known only to a few priests so that eventually all knowledge of her burial place was lost. In 1185 St. Malachy was bishop of Down, and wanting to discover the burial place of St. Brigid, who was supposed to have been buried with St. Patrick and St. Columcille, prayed hard to the Lord to reveal the burial place. A beam of light settled over a spot on the floor of the church and sure enough, when St. Malachy dug at this spot, he found the graves of Saints Patrick, Brigid and Columcille. Malachy petitioned Pope Urban 111 for permission to move the bodies to Down Cathedral. The move took place on 9 Jun 1186, the Feast of St. Columcille. At the dissolution, in the reign of Henry VIII, the sacred shrine was despoiled and the relics of the Saints were scattered. Luckily some were saved from destruction. What is reputed to be the head of St. Brigid now rests in a chapel devoted to her, in the Church of St. John the Baptist in a town called Lumiar, near Lisbon, where her feast is celebrated yearly. The farmers in the locality regard St. Brigid as their special patroness.

In 1276 the Bishop of Lisbon decided to build a church at Luimar and he placed it under the patronage of the nuns at Odivilelas. When King Dinis heard that three Irish knights were bringing St. Brigid’s head to Portugal, he wanted to have it preserved in the convent of Odivelas, but Divine Will decreed otherwise; it was placed in the church at Lumiar, where it remains to this day.

A portion of the skull was given to the Rev. Father Traynor of Killester, under seal of the Cardinal of Lisbon, on November 16th 1928 for Killester Church. The Archbishop of Dublin approved it on November 26th 1928, and on Sunday 27th 1929, the solemn ceremony of translation took place.

The relic of St. Brigid was not in the reliquary when it was stolen.